The Top
Collection Agency for Nova Scotia and
all of the Maritimes.

MetCredit is the Atlantic Province’s leader in ethical commercial and consumer debt collection.

The economy in Nova Scotia has seen sporadic improvements in recent years, but Canada’s second smallest province still struggles with the stagnation seen in the Maritime provinces for decades. In order to be effective, a Nova Scotia collection agency must have an in-depth understanding of industries from energy and mining to fishing, agriculture and manufacturing.

With over four decades of collection agency experience ranging from small businesses to some of Canada’s biggest retailers and telecoms, MetCredit is able to consistently sustain among the industry’s highest success rates for debt collection by a Nova Scotia collection agency.

With offices Canada-wide and licensed and bonded in every Canadian province and territory including Nova Scotia under the Nova Scotia Collection Agencies Act, we are uniquely capable of collecting and listing commercial and consumer debt not only in Nova Scotia and the Maritimes, but absolutely anywhere in Canada.

Your Nova Scotia Collection
Agency Since 1973.

Nova Scotia’s debt collection laws are complex and restrictive, and it takes a knowledgeable and experienced debt collection agency to navigate the regulations effectively. MetCredit’s extensive reach, paired with its advanced and proprietary collection industry technologies and unmatched depth of experience enables our nation-wide team to swiftly collect debt in Nova Scotia that might be unrecoverable for a smaller, less capable collection agency.

The word that resounds most consistently in our offices every day is “respect.” It is by respecting our client’s customer base and the real issues confronting every debtor along with their practical solutions that we are able to quickly and effectively collect debt, preserving valuable business relationships wherever possible. Often, we not only collect fast, but also equip debtors to more effectively manage their finances and avoid pitfalls, opening new doors for everyone.

At MetCredit, we don’t get paid until we collect, meaning there is no risk to you. And with among the collections industry’s highest success rates, our clients see their money come in quickly, time after time, whether in Halifax, Dartmouth, Cape Breton – Sydney, Truro, New Glasgow, Glace Bay, Kentville, Sydney Mines, Amherst, New Waterford, Lunenburg or other Nova Scotia communities.

Delaying could cost you more than you realize. It’s a statistical fact: the longer you wait to collect overdue accounts receivable, the less you are likely to recover.

See how much money owed to you is worth now, and what happens if you wait longer.

Your debt valued at $250
is now worth approximately:

100% of its original value,
without a collection agency.

This debt is statute barred and can probably not be collected.

Considering the statutes of limitations in , you have about before this debt is Statute Barred.

Note: Values are generated based on statistical aggregated data and intended to give an idea of expected collectability. Every case is unique.

Select the value of the debt you’re concerned about collecting
What province or territory does your business operate in?
Select the due date (This is not the invoice date unless payment was due upon receipt)
10
Pro Debt Collection Tips to Get Paid Now & Eliminate Bad Debt Forever 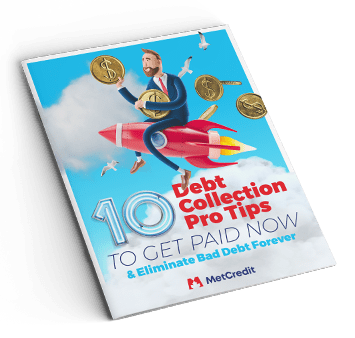 “MetCredit does an excellent job at successfully collecting our overdue accounts without harming my relationships, which was my biggest worry. Whatever it is you do, it sure is effective!”

Getting the (Secret) Best Deal in Commercial Debt Collection

6 Ways to Transform Your Business’ Recovery from COVID-19